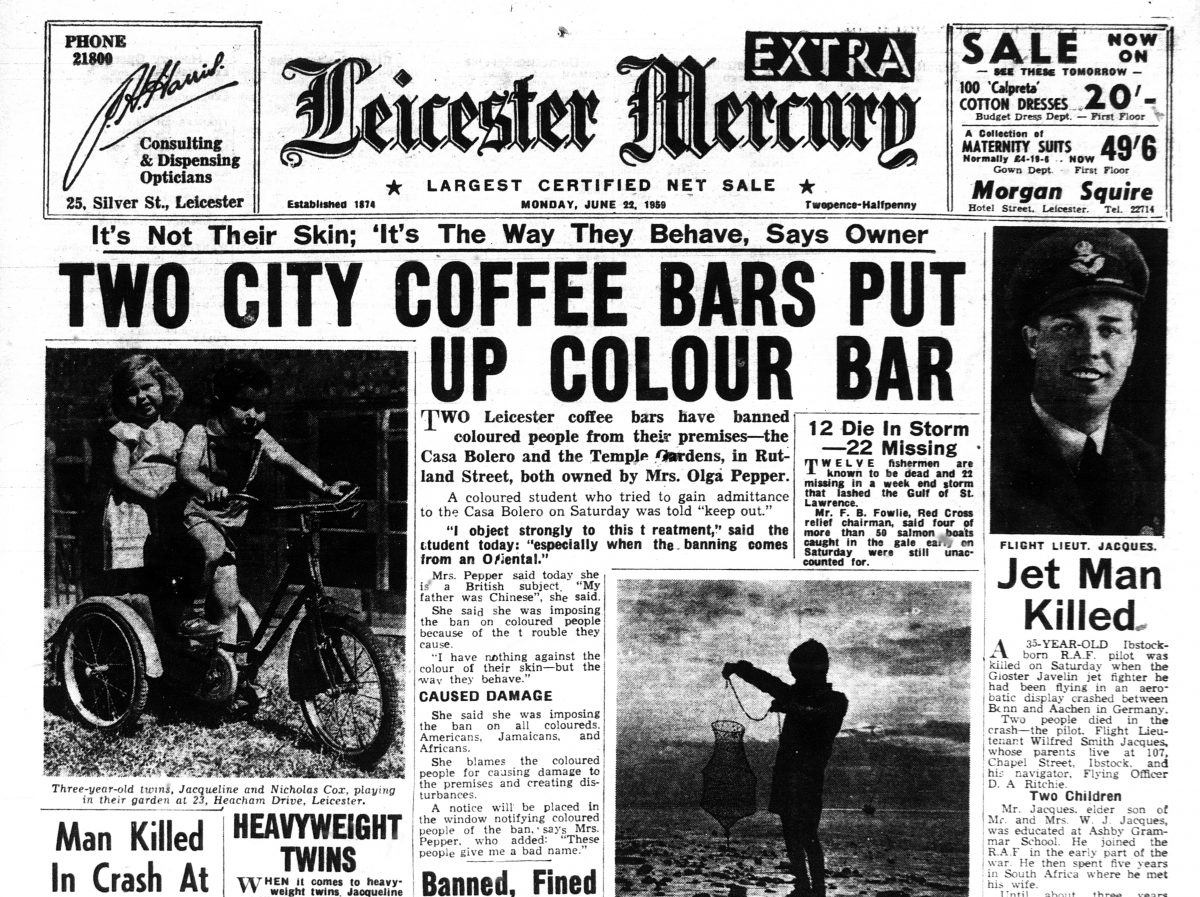 Leicester has a national and international reputation for its community cohesion and is seen as Britain’s premier multicultural city. Sixty years ago things were very different.

It is safe to assume that discrimination in jobs, housing and public places was widespread during the 1950s and 1960s. After all, it was not illegal – it just went unreported. It was only when discrimination was challenged that it made the news. This article tells the story of some of the attempts that were made to break colours bars in Leicester.

When El Casa Bolero coffee bar opened in the late 1950s at 33 Castle Street, it boasted the Leicester’s first espresso machine. It was the first coffee bar in the city and was owned by Olga and Leslie Pepper. The Peppers then opened the Temple Gardens coffee bar on Rutland Street and by the mid 1960s both premises were part of a thriving local coffee bar scene.

Although the Casa Bolero and Temple Gardens let beatniks in, the owners barred what were then called ‘coloured people.’ After a student was refused entry, a protest march was organised by Leicester University students. If the colour had not been challenged , it is likely that it would have gone unreported.

According to the Daily Herald three 19 year old student teachers, Tony Wood, Michael English and lan Reid were shocked when they saw four ‘coloured’ men refused drinks in the lounge of the Brickmakers’ Arms in St. George-street Leicester. The students asked them to stay and tried to buy them four pints of bitter, but the landlord ordered them all out. Apparently, the landlord  had banned West Indians and coloured American airmen from the lounge and smoke room.

A Committee Against Racial Prejudice was formed and the students wrote a letter protest to the pub’s brewers Bass at Burton. The students  called for the boycott of the pub and eighty students from Leicester University held a picket outside the pub. These photos were taken by David Francis and later published in Ripple, the student magazine.

George Claricoates, the manager of the Brickmaker’s Arms, told the Daily Herald that: “Part of an Englishman’s pub should be reserved for Englishmen. If I allowed one coloured person in, others would follow and trouble now confined to the public bar would spread to the entire place.”

The organiser of the demonstration, Mr Barrie Evans, aged 21, said: “Numerous organisations in the City are joining our committee. We intend to hold mass demonstrations wherever we find a colour bar operating.”

Ii is possible that this form of segregation was widespread in local pubs. In those days of public bars, smoke rooms, snugs and lounge bars, the layout inside the pub lent itself to both formal and informal segregation. Public bars being mixed and lounge bars being reserved for white customers. In some pubs women were not allowed into public bars.

The Admiral Nelson pub on Humberstone Gate stood roughly where Anne Summers store is today. In 1964, the pub refused to serve the University lecturer Dipak Nandy and his wife, Maggie. This refusal was purely on the grounds of Dipak’s ethnicity and it led to a series of demonstrations and pickets during the autumn of 1964.

On the evening of Sunday 8th November 1964, a sit-down demonstration was staged in the upstairs lounge bar to protest against the colour bar. This was the second demonstration to be organised. A group of British and international students – black, Asian, and white – and lecturers (including Dipak Nandy) went up to the lounge bar and sat together. The landlady called the police who literally threw them out and arrested four people. David Angel was one of those arrested and he later gave evidence in court that he was a member of the Leicester University Anti-Racialist Committee and that: “It was to be an orderly demonstration. I went into the lounge bar with three others for a drink. Before we were served the landlord pointed us out to his staff and told them not to serve us. We asked politely why we could not be served, but were given no reason. We were not quarellsome in the slightest.…The landlord asked us to leave, and again we asked for a reason. About ten minutes later the police arrived and I was ejected. As I was being taken down the stairs by the landlord and a policeman I asked the officer for his number and to see his superior officer.”

Dotun Adepegba (27) a Nigerian student, 18, Gopsall Street, Leicester, told the court that he went into the lounge bar for a drink. I sat in the corner and asked some students to buy me a drink. “While I was drinking the landlord’ came up to me and said: ‘You get out. You are a black man  and  are  not wanted   here….two policemen then came in. They later came up to me and one of them said, ‘Don’t you know that blacks are not wanted here.'”

Mr. Adepegba said that he asked if he could finish his drink but was told: “I am not going to give you any time to finish it.” He added that the two police officers then picked him up, carried him to the top of the stairs, and threw him down. Dotun Adepegba later became a professor at Lagos University)

Also arrested was Peter Wright. He told the court that “It was our intention to protest over this colour bar by speaking to people in the bars and telling them about the landlord’s actions.” Wright said that there was a large crowd at the bar but they were not being served. “I was later asked to leave and did so. I then saw a Nigerian student being pushed violently down the stairs.

“There was a crowd at the entrance door which began to surge forward. Policemen started to push them back and during the struggle one of the officers fell over and I tripped over him. Peter Wright was bound over in the sum of £20 for 12 months to be of good behaviour after being found guilty of committing a breach of the peace by fighting and behaving in a disorderly manner.

The licensee of the Admiral Nelson. Mr. Tom Grant, refused to comment to the press on the incident.

Also arrested, John Hardman told the court that “I was standing in the yard with another group of people when I suddenly saw this Nigerian student thrown down the stairs. I asked the policeman who pushed him why he did it so violently and then the police came down and arrested me.” John was bound over for 12 months for committing a breach of the peace by fighting and behaving, in a disorderly manner.

On Saturday 21st November 1964, a visiting white American professor was among 30 people who were barred entry to the “colour bar lounge” at the Admiral  Nelson,  during an anti-racist demonstration. Professor Peter Rose, who was on a Fullbright professorship in sociology for a year at Leicester from the University of Northampton, Mass., said afterwards: “I was given no grounds for being turned out.”

Among the others who were turned away from the lounge were 11 Leicester University lecturers, a probation officer, a schoolteacher, several social workers, a number of students and a design engineer. Some were told “You are a trouble maker” but others were given no reason for being turned away. The organisers of the demonstration, Leicester University Anti-Racialist Committee, claimed later that several people not connected with the demonstration were also turned away.

‘THREE attractive nurses who have delivered hundreds of babies throughout the country and have looked after hundreds of sick people cannot get accommodation in Leicester—because they are coloured. They claim that landladies have slammed doors m their faces, suddenly changed their minds about letting rooms and told lies about vacancies as soon as they have seen the nurses All three, each of them qualified as nurses and midwives are taking a post graduate course to qualify as health visitors. .’

‘Camilla Monekoaso. aged 25, from Nigeria. said yesterday: “We have literally had doors slammed in our faces. I am staggered by the prejudice,” Olive Sweeney, aged 24. from Jamaica. said “I am sick of being lied to by English property owners. I have been after flats and told they are taken and then seen the same place advertised days later.” Mr Denis Rice. warden at Vaughan College. Leicester, where the girls are taking the year’s course. said. I am appalled at this colour bar. “This is a new experience for our students. For a month now they have been embarrassed and hurt by people in Leicester. The only places they can get in are slums.” The girls want to get into a large flat or three bed sitting rooms quiet enough for them to be able to do their studies at night.’

The University anti racialist group soon became the Leicester Campaign for Racial Equality which campaigned for a law to stop racial discrimination. After a narrow Labour victory, in the general election, the new home secretary, Roy Jenkins, brought in the Race Relations Act of 1965. Whilst this first piece of legislation was hopelessly flawed (it excluded housing and employment), subsequent legislation gave the law more teeth.

In November 1975, ten years after the first Race Relations Act, there was a major breakthrough in the fight against colour bars. Using the Race Relations Act, the owners of the Leicester Palais de Dance, Mecca Ballrooms, were stopped from refusing people admission on grounds of colour, race, ethnic or national origin. This was the first ever such injunction was taken out against a major company in Britain.