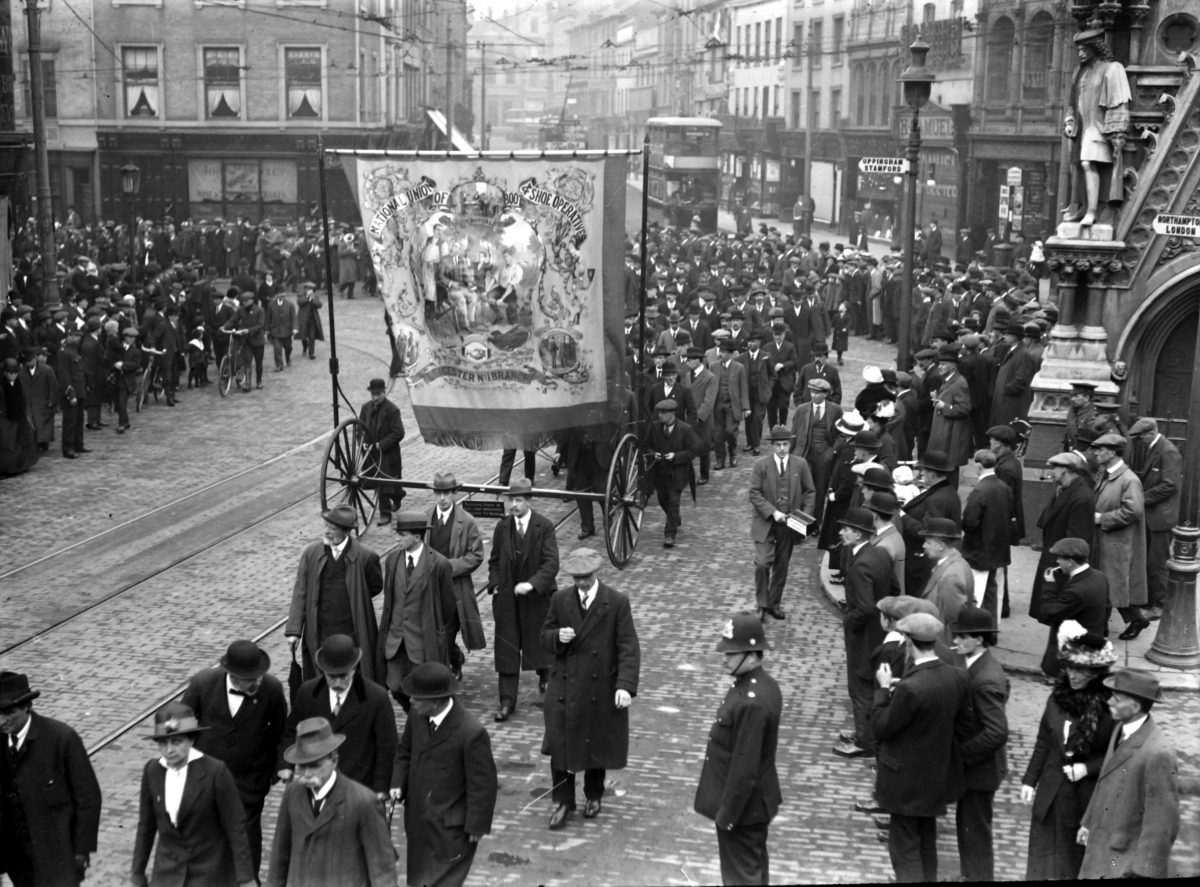 If this is a May Day demonstration, it is better attended than the one described below. (ROLLR)

THE 1897 MAY DAY DEMONSTRATION

This article appeared in the weekly paper the Wyvern. It offered a weekly prize for a published article. A.C. Brant was a compositor by trade, a Secularist and member of the Independent Labour Party

Last Saturday I had the pleasure of taking part in the procession organised by the Trades Council of this town. I cannot help thinking that if one of primary reasons for convening this demonstration is to display the numerical strength of Trades Unionism with a view to inducing non unionists to join the ranks, the end in view is defeated by the deplorable apathy of the vast majority of members who are invariably conspicuous by their absence. Take for instance the Boot and Shoe Trade Union, which on Saturday was not represented by so many scores as it numbers thousands of enrolled members.

Numerous trade associations were not represented at all. The branch to which I have the honour to belong numbers more than two hundred members, but only four of us put in an appearance, although a special meeting was called by our secretary to bring us up to scratch. I am afraid that many of us would not exactly sell our birthright for a mess of pottage, but a pint of heavy wet would be preferable to the trouble of asserting our rights to the privilege of an eight hours day. I asked an acquaintance of mine if he intended to demonstrate and he said it did not look “respectable” to march through the streets with all the rag-tag-and-bob-tail. He is a shoe-hand. To cap this, I may here mention that I heard a processionist, just before starting out from  Humberstone-gate, observe to his pal – “I say, Bill, let’s get among our own blokes I don’t want folks to take me for a blooming finisher!” And then we laugh at the caste traditions of the Hindoos, with their Banians and Soodras.

As I have related, only four members of my trade society were in evidence, and I suggested that as we had neither band nor banner to distinguish us from our fellow craftsmen, we might have bought a pole with a few dilapidated slippers suspended there from, such articles being an inevitable part of the attire of those who follow our particular art and mystery.

As it was, “we few, we happy few, we band of brothers” were the last in the procession, excepting that behind us came the yellow van horse and driver and the yellow (van) dog, the latter being a great laughter maker all along the route. (1)

As we came to a. sudden halt for a moment or so, a fat old gentleman said to me: “What’s up? Are you Oddfellows or Buffaloes?” Treading accidentally on his foot I replied, “You will perceive that we are not Corks.” (2)] I was glad to arrive at the Football Ground, as I found processioning was warm work. Mr Jabez Chaplin was in fine form and made a rattling speech. . Comrade Hammill made a ringing, rousing oration, but I regret that he marred the pleasing effect by a reference to the Queen which was Boerish enough for President Kruger. Really, F. Hamill ought not to be so ‘hamilliar’ with Her Majesty. If my pun was bad, so was his taste. Mr Tunley’s speech was very good, and although I did not hear the gentlemen who were holding forth on the other wagon, I am informed that they gave a good account of themselves

(1) The idea of a touring horse-drawn caravan for spreading a political message in the countryside was pioneered by two organisations advocating common ownership of the land. The Red Van of the English Land Restoration League and the Yellow Van of the Land Nationalisation Society.

The May Day Labour Demonstration last Saturday was attended by a crowd of some 1,500 interested working men. There were no curiosity-seekers, as there are when such meetings take place on Sunday afternoons and evenings. We do not suppose that the Trades Council are quite satisfied with the dimensions of the audience, but at least the men attracted were in earnest.

Saturday afternoon is not a good time for meetings especially at this period of the year when men will naturally go into their gardens. We wish they would try a Monday evening when probably the greatest success would be obtained. The principal speakers on the occasion were Mr. Hammilll and Mr Haslam and the resolution passed not only urged men and women to join the organisations in their respective trades, but called upon the Government to introduce an Eight Hours’ Bill, and declared for land nationalisation as a means of absorbing the labour of the present unemployed.

Questions of organisation the workers can settle for themselves and they are well advised when they join the trade unions, and then see that the policy of the unions is well directed, but it is no more use asking the present Parliament for an eight hour day and land nationalisation than to expect to grow pineapples at the North Pole.