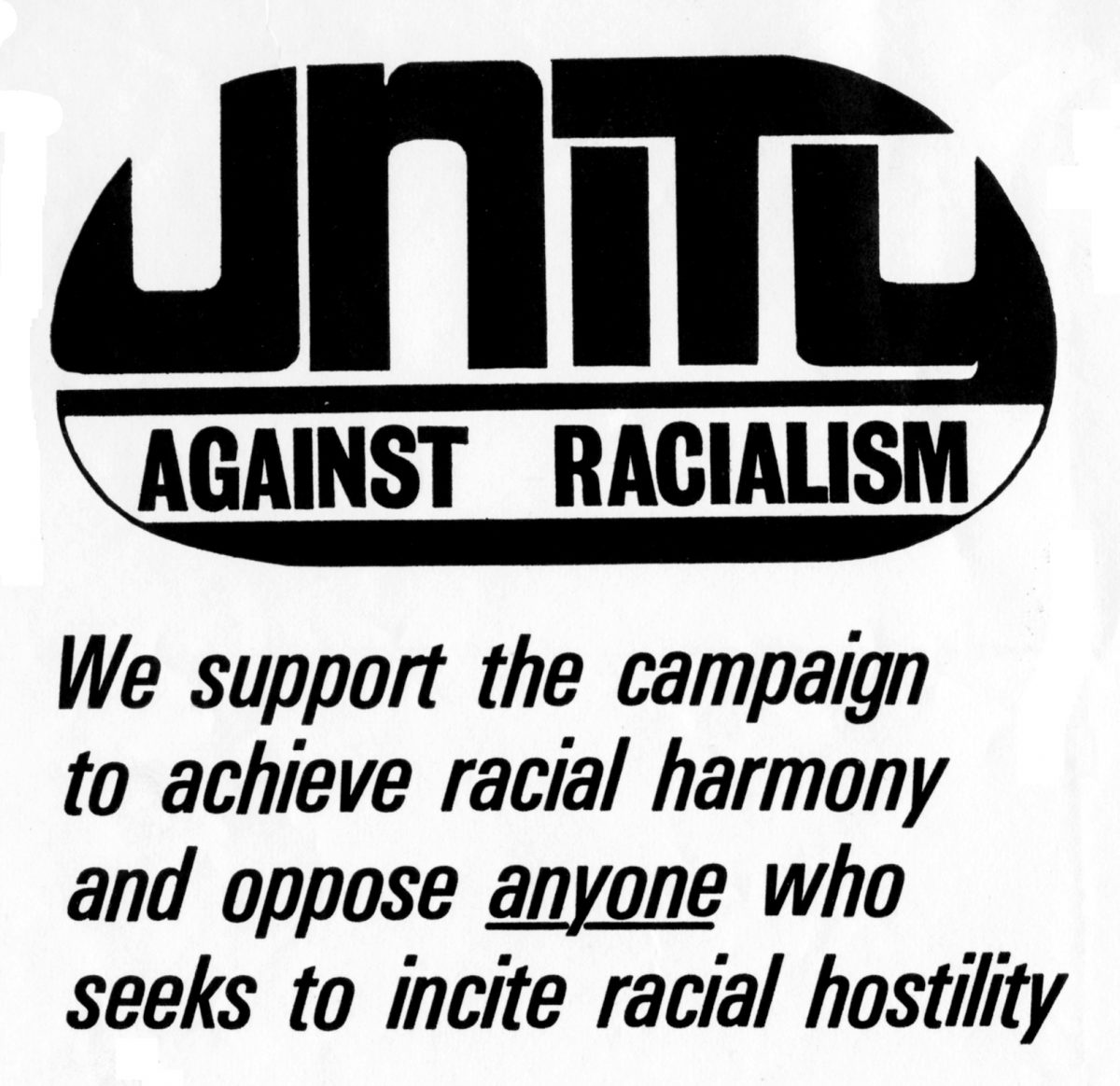 The cornerstone of the National Front’s policies was the compulsory deportation of all non-white immigrants, along with their descendants, as well as their white British partners in mixed-race relationships. The Front’s progress in Leicester was a local phenomena, a bye product of the hysteria whipped up by the coming of the East African refugees in 1972. Elsewhere in Britain the Front still remained on the political fringes.

In Leicester, the NF had successfully presented itself as a nationalist party with no connection to historical fascism. It liked to depict the anti racist Inter Racial Solidarity Campaign as a ‘red’ organisation and this view was shared Leicester Mercury and ATV who saw anti-racists as left wing extremists.

The 1976 local elections were the high point of the Front’s local electoral success. The Front had increased its share of the vote in Leicester from 8% in 1972 to 18% in 1976 and had contested all 16 wards in the City. In two wards it polled nearly 30% of the votes and in Abbey ward it had come within 61 votes of victory. The NF now had a local office with full time organisers. Anthony Read-Herbert, the ‘moderate’ face of the Leicester NF, was confidently predicting that the NF would be elected onto Leicestershire County Council in May 1977. Meanwhile, the Conservatives had taken control of the City Council as a result of disenchantment with the Labour government under its new prime minister, Jim Callaghan.

Up to this point, both Labour and the Conservatives had taken a low profile on what were then called ‘race’ issues. However, many in Labour’s ranks realised that the party needed to actively oppose racism; they also felt that Labour needed to redeem itself after the shame of the Council’s attempts to discourage the Ugandan Asians from coming to Leicester.

Although the Inter-Racial Solidarity Campaign had given out 20,000 anti-racist leaflets prior to the 1976 election, the Front’s vote had grown. The Leicester Mercury had played a significant role in creating support for the National Front in Leicester. Not only had it represented immigrants unfavourably, but the paper had also portrayed the NF as being drawn from ordinary Leicester people. Its coverage seemed to suggest that the Front’s response to immigration (repatriation) was perfectly acceptable and natural.

In the lead up to the 1976 elections, the Mercury provided a platform for the NF. On 7th April an article reported the NF claim that the IRSC’s election leaflets were ‘illegal and a smear campaign’ that they had been paid for with tax payers’ money. The following day, an article described the ‘the first six of the 48  (NF) candidates’ in very sympathetic terms – it emphasised that they were all ordinary local people, describing Mrs Betty Calver as having been born in Leicester and lived in the city ‘all her life’, Mrs Margaret Saunders as ‘a  Leicester housewife with five children’, Miss Merilyn Taylor as ‘a secretary at a local firm’, and Mr Stan Carter as a hairdresser who was born in Leicester and had three children.

The paper’s coverage following the 1976 local elections took the position that the NF was now a viable alternative to the mainstream political parties and consequently had to be taken seriously. Given that the Mercury was the biggest newspaper in the Midlands, printing 70,000 copies six days a week, this was a serious problem . In 1975, the NUJ had adopted guidelines for journalists which required journalists only to mention someone’s race or nationality if it was strictly relevant. The Mercury had yet to adopt this practice.

The formation of Unity

The activists in I.R.S.C. realised that a much broader coalition was needed if racism was to be successfully overcome in Leicester. The first step towards this came in July 1976 with a “Unity Meeting” sponsored by the Community Relations Council, the Indian Workers Association, I.R.S.C and over 20 Labour Councillors. Ray Sutton, the IRSC secretary, played a key role in bringing this meeting to fruition which was attended by over 250 people. The outcome was the establishment of a new local anti racist group: Unity Against Racism. At its second meeting Unity in August 1976,it was agreed that Unity should work towards:

Unity Against Racism was genuinely local and broad based and it encompassed a wide spectrum of political opinion. Labour party members played a prominent role, though its treasurer Bill Oakfield was a Conservative and member of the Association of Jewish Ex servicemen. Unity did not rely on having to bus supporters in from outside Leicester and saw that opposition to racism came in many forms.

In February 1977, the N.F. suffered its first setback with the very public resignation of its local chairman, Terry Verity, who had become convinced that the NF was ‘a Nazi Machine.’

Unity’s first attempt to deal with the Mercury was through a full page advertisement in the paper. It raised £800 and got 500 prominent people to sign its anti racist declaration.

The impact of the advert was that it began to make those expressing racist views feel out of step with the rest of the population.

Prior to the May 1977 County Council elections, Unity, along with IRSC and the Community Relations Council elections distributed 45,000 leaflets, mainly to the housing estates where the Front claimed to have support. Thousands of posters and stickers appeared all over town and the net result of these campaigns was a fall in the NF vote from an average of 18% in 1976 down to 13% in 1977. Unity and IRSC carried the fight right into the count, distributing “Unite to defeat racism” stickers to all the Party workers.

In its first two years, Unity organised a procession and carnival attracting 2,000 local people. Other projects included a children’s essay competition, a mini carnival at the Phoenix Theatre, a ‘One World Week’ festival and comprehensive leaflet and poster distributions. Sub groups of Unity sprang up in Knighton, Wigston, Highfields, Belgrave and at the University.

In October 1977, Unity Against Racism organised a carnival. This was a procession form Victoria Park to Spinney Hill Park where there was a concert. This event was designed to show local opposition to racism. It was a success and a second carnival was held in August 1978. These carnivals anticipated the Rock Against Racism carnivals held later in London and elsewhere. The first The first ‘Carnival Against the Nazis’ was held April 1978.

The new Tory Council in Leicester had given the National Front permission to sell its newspaper outside the Town Hall. In June 1977, IRSC began to monitor the activities of the NF newspaper sellers and various means were tried to persuade the City Council to withdraw the NF’s licence. I.R.S.C. began to collect signatories on a petition to get the licence revoked. The Anti Racist Committee of the Trades Council began a picket of the newspaper sellers which carried on every Saturday morning for months. This was supported by IRSC. Despite some initial difficulties, the pickets were peaceful. IRSC tried to avoid answering the NF’s chants so as to avoid the perception that one side was as bad as the other. The picket virtually stopped the sales of the NF News and the NF were reduced to selling out of date copies.

The organisation of the picket eventually passed to IRSC. In March 1978, over 300 people participated in the picket, though it was usual for the numbers to be smaller. Colin Vann of the Leicester Mercury described the picket as “an affront to the dignity of a proud city,” believing that the N.F. had a perfect right to sell its papers. He also argued in the Mercury that the anti-racists were just as bad as the National Front.

In May 1978, a 5,333 signature petition to revoke the licence of National Front, was rejected by the Tory controlled Public Control Committee. The campaign continued, though the Council then attempted to stop I.R.S.C. from giving out leaflets which described the Front as ‘evil.’ It claimed that this was not allowable under an 1868 law, however the police refused to enforce it and the anti-NF leafleting continued.

That same month, a 200 strong meeting sponsored by the Anti-Racist Committee was held at Highfields Community Centre. This initiative came from the Trades Council where the S.W.P. was strongly represented.

In the City Council by-elections of 1978, the NF vote had dropped significantly and Brian Piper of the Community relations Council commented that “it’s safe to say that we’ve got the Front on the run.” In November, there were protests outside the National front HQ in Humberstone Road as the Front’s national organiser Martin Webster arrived to address a front meeting. Two people were arrested.

In one weekend in February, prior to 1979 general election, 72,000 leaflets were delivered. In April 1979, another full page ad was taken in the Mercury to mark Unity’s second anniversary. It was paid for by block adverts from political parties, local businesses, trade unions and individuals.

By end of the 1970s, the anti racist movement in Leicester was well established and diverse. It had grown as a reaction to the targeting of the city by the National Front and in so doing had re-awakened Leicester’s radical tradition.

In March 1979, the Leicester Council for Community Relations listed the following anti-racist groups active in Leicester:

A future post will cover the events of April 1979 when the National Front staged its last march in Leicester.